Skip to content
FREE Canada-wide shipping on orders over $75 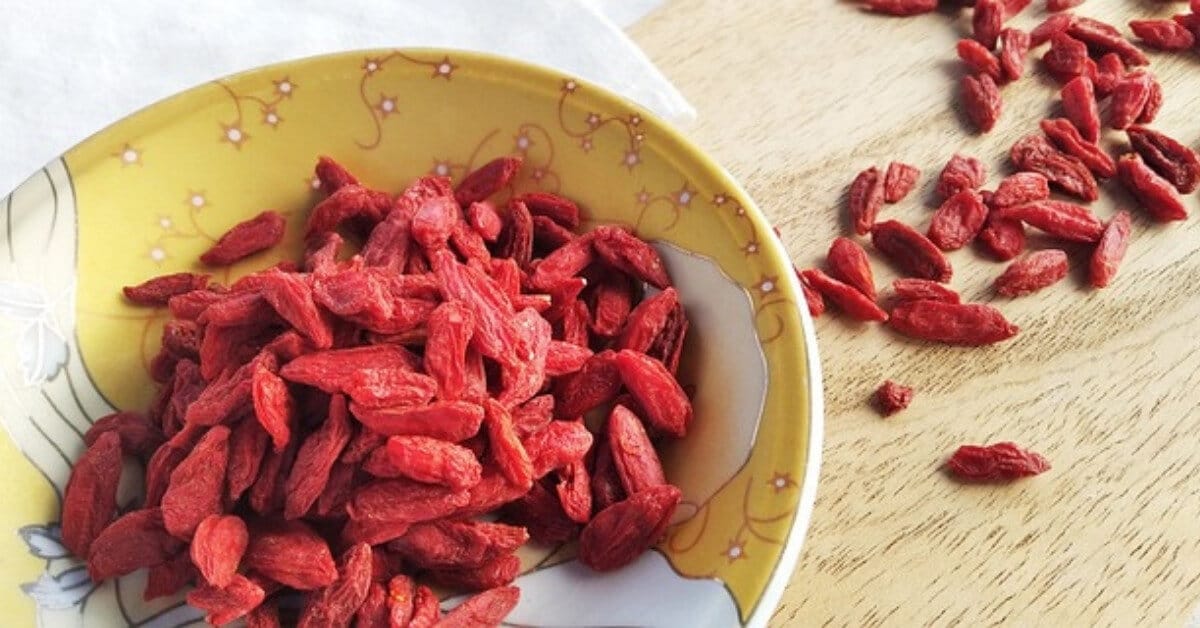 So many people are turning to a more holistic way of life, and there is a lot of focus on several superfoods like goji berries. Scientists are constantly investigating the proclaimed health benefits of goji berries, also known as wolfberries.

This berry has been called the ‘fountain of youth’, amongst other glowing reviews. Its nutritional components are excellent, and researchers have supported many claims of its benefits.

Wolfberry is known to have originated from Asia, but it can be grown in other areas of the world. It is a very popular food supplement and herb in Asia and has been used for over 2000 years.

The nutritional components of wolfberry are quite vast. It contains double the amount of vitamin A that an adult needs in a day, and it also contains vitamin C.

It is known to be rich in essential oils and amino acids. This berry is rich in protein and fiber. Both can create a feeling of fullness, so you do not have to eat too much, making it great for weight loss.

Why you should add Wolfberries to your healthy diet

Studies have shown that wolfberries have a hypoglycaemic effect on the body. What this means is that it can lower blood sugar levels. It does this by reducing the low-density lipid cholesterol and also the circumference of the waist, both of which are causes of diabetes. It is also known to increase insulin levels, thereby curbing diabetic symptoms. This is, of course, a long-term effect.

Since wolfberries can reduce the levels of low-density lipid cholesterol in the blood, they, in turn, reduce the risk of heart diseases. Bad cholesterol in the blood causes plaques in the blood vessels and arteries, which in turn disrupts the natural flow of blood. When this happens, the heart is forced to pump blood at a high rate, and this causes muscle weakening which often materializes to heart failure or a heart attack. A 2020 study showed that when wolfberries have protective effects on the heart when consumed on a consistent basis.

Wolfberries are also called Lycium barbarum. Polysaccharides are a major component of wolfberries. They are proven to have antitumor effects against cancerous cells and stop the growth of tumors. The antioxidants in the wolfberries are also known to be anti-inflammatory. The Chinese have used this berry in their traditional medicine for the treatment of cancer for several decades.

There have been talks about just how well the wolfberries enhance well-being and dispel anxiety and depression. A 2016 study conducted on rats proved the same. The polysaccharide component of the wolfberry increases serotonin levels in the body, and this decreases anxiety levels. The β-carotene component in the berry has also been proven to reduce anxiety. Wolfberries are also known for giving the feeling of overall well-being. Another study conducted on humans ingesting the modifications of wolfberries for 14 days proved that it increased their level of mental awareness, increased their quality of sleep, reduced stress and fatigue, gave them an all-around feeling of contentment and happiness.

The wolfberry has been said to increase immunity levels. This means it can be taken as a preventive measure to ward off illnesses or infections. A 30-day study on older adults showed an increase in lymphocytes. Another 3-month study showed that the participants who were fed variations of wolfberries experienced an increase in immunoglobulin G levels in response to an influenza vaccine. There were no reports of influenza infection either. This concludes that long-term supplementation of wolfberries in older adults increases their body’s response time to vaccines, not affecting their immune system.

Wolfberries have been used as aphrodisiacs. Studies show that they improve the quality and quantity and also increase the motility of sperm. They increase sexual performance in men and also protect the testes from harmful substances.

The antioxidants like zeaxanthin in wolfberries improve eye health. Zeaxanthin operates as sunblock so, it shields your eye from blue light. The macula is the central area of the retina, and continued intake of zeaxanthin reduces its degeneration in older adults. Studies show that it also reduces hypopigmentation and accumulation of soft tissue in the macula.

Important Side Effects and Drug Interactions of Wolfberries

Irrespective of all the benefits they possess, it is pertinent to educate yourself about the side effects.

There will be itching in the nose or mouth, shortness of breath, rashes, or hives for some people.

Wolfberries may interact with drugs like ibuprofen or aspirin, or warfarin. When it interacts with warfarin, it induces bleeding. You should consult with your doctor when introducing wolfberries to your diet, especially if you are on medication.

How to Add Goji Berries to Your Diet

Since Goji berries are now so popular, you can easily find them in fresh and dried forms for easy consumption. They are also often included in superfood mixes and are also sold as supplements.

Wolfberries can be conveniently classified as preventive rather than the usual reactive medicine everyone is accustomed to. Its antioxidants make eye health, skin health, brain health, and even sexual health top priorities. It also enhances your mental health by dealing with anxiety and depression. It is dynamic and versatile both in function and efficiency. So, there you have it, the famous wolfberry, true to its word and worth every hype.

Have you ever heard of the Aronia berry?

Aronia Berry, also known as chokeberry, is a fruit that hasn’t been mentioned enough in discussions of superfoods. Aronia berries are one of the new and interesting additions to the superfruit category. They can add flavor to anything from pies to smoothies and can be eaten as an Aronia berry supplement. These fruits can be slightly tart when ripe, are native to North America and have many health benefits.

5 Healthy Super Berries You Need to Know About

Benefits Of Aronia Berries vs Blueberries